WWE SmackDown spoilers from last night’s tapings in Birmingham, Alabama: * Seth Rollins kicks off SmackDown and gets major heat. Fans chant “you sold out” and Rollins mocks them, telling them to keep the heat coming. Rollins says the fans would sell out as well. Rollins talks about Dean Ambrose and says he doesn’t belong […] 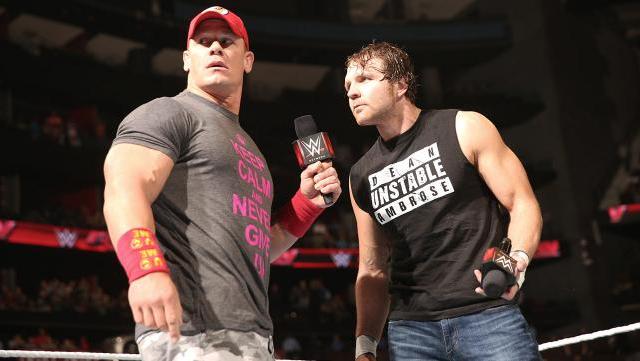 – Tonight’s WWE RAW Kickoff Pre-show opens up with Byron Saxton, Alex Riley and Booker T at WWE studios in Stamford, CT. They hype Big Show vs. Rusev and tonight’s guest stars. We get a look at the feud with Seth Rollins, John Cena and Dean Ambrose. We also see Cena and Ambrose on MizTV […]

– The 2014 TNA Bound For Glory pay-per-view opens with a video package and a look at the feud between James Storm, Sanada and The Great Muta. – We open up from Korakuen Hall from Tokyo, Japan. Taz and Mike Tenay are on commentary from Nashville. We go to the ring with Jeremy Borash. Borash […]

NXT kicks off with Baron Corbin, who has been completely squashing his opposition since NXT Takeover II. Baron Corbin vs. Elias Samson End of Days. Pin. That’s the entire match, ten seconds. Winner: Baron Corbin Sami Zayn comes to the ring to a huge ovation and “Ole!” chants and says he’s sick of making promises […]

According to a report by TMZ.com, former UFC and Bellator MMA fighter War Machine attempted suicide while being held in a Las Vegas jail on Tuesday. War Machine, real name Jon Koppenhaver, is awaiting trial for 30-plus charges from an alleged assault against his ex-girlfriend, Christy Mack. The report states War Machine was found unresponsive […]

TNA Not Responding To Wrestlers About Contracts?

According to sources, TNA is not currently responding to talent who are currently without a contract or whose contract will be expiring soon. Several members of the roster have been trying to contact people at the office in Nashville but are not having their calls returned. As previously reported, the company is not offering any […]

Word coming out of WWE this week is that Eden will be replacing Justin Roberts as the new RAW announcer. Lilian Garcia will stay on SmackDown and when Lilian isn’t present at live events, Byron Saxton will fill in. It was noted that the decision for Eden to work RAW has already been finalized but […]

– Bellator MMA likes to provide fans with behind-the-scenes footage from their recent events. The latest, Bellator 128: Uncut, shows new champion Joe Warren enjoying his title belt. Along with footage of Warren after his decision victory over Eduardo Dantas, the camera crew caught Michael Page, Emiliano Sordi and Tiger Sarnavskiy as they prepared for […]

– We noted before that Justin Roberts’ WWE departure came as a big shock to everyone in the company. It was described as similar to Matt Striker’s release back in 2013. An interesting story on Striker’s release and how close some WWE executives pay attention to what’s going on is after Striker was cut, WWE […]

The 2014 WWE Slammy Awards are no longer set for December 29 from Washington, DC. This is due to a live event happening on the same night in Richmond, Virginia. Several wrestlers will not be available for RAW. A new date hasn’t been set for this year’s edition.

AlternativeNation.net recently spoke with Kane to promote WWE Studios’ See No Evil 2. The full interview is available at this link. Below are some highlights: Triple H’s leadership in WWE: “He’s done a tremendous job with the Performance Center in Orlando, and with NXT. They have a great product, the guys that are coming out […]

Which Match Will Likely Headline WWE Hell In A Cell?

The Dean Ambrose vs. Seth Rollins Hell in a Cell match could possibly go on last at the upcoming PPV event. However, both Rollins vs. Ambrose and John Cena vs. Randy Orton will get equal promotion by WWE. That bit of news will certainly add fuel to the fire of fans who are incensed by […]

The show opens up with Mike Tenay touting Bound for Glory as “memorable” but he doesn’t elaborate on that description, so it’s subject to interpretation. Kurt Angle comes out and says that the competition in TNA has never been stronger than it has under his tutelage and calls Bobby Lashley out to answer for his […]